It's time for environmentalists to move on from the Trans Mountain pipeline - Macleans.ca

Geoff Salomons is a political scientist. He is completing his doctoral dissertation on intergenerational resource wealth governance in Alberta. Follow him on Twitter at @geoffsal. He currently lives in Edmonton.

The recent trade dispute between Alberta and British Columbia over the Trans Mountain pipeline has raised some difficult questions about the nature of the Canadian federation, the challenge of developing effective climate policy at the national level in a federation, and the intractability of opposing interests.

On the one hand, we have an alignment of interests between the Alberta NDP government and the oil industry. The current pipeline constraints facing the industry are in fact increasing transportation by rail, but more importantly creating a widening gap between the world price of oil and what Alberta receives for its product (WCS). This gap is estimated to potentially cost the oil industry and the government of Alberta over $15 billion per year. This is money that could be leveraged to increase the energy transition in Alberta and beyond, although more explicit details on this are needed to accept this argument more fully.

On the other hand, we have deeply entrenched opposition to the TransMountain pipeline from environmentalists, First Nations, the Lower Mainland municipalities, and the NDP government in B.C. This opposition is driven by two concerns. The first is concern over of what a potential spill would do to Vancouver, English Bay, and the B.C. coast. The second is concern over climate change. If we are serious about mitigating climate change, there is no need for additional fossil fuel infrastructure that facilitates emission growth in the near term. For the sake of this piece, I am setting aside the spill concerns and focusing on the climate change issue specifically.

For the environmental movement, the focus on pipelines has been an absolutely brilliant strategic move. Following the dual failures of the Canadian Liberals’ “Green Shift” campaign in 2008 and Obama’s climate plan in 2009, the environmental movement recognized it would be unable to gain adequate political traction on climate change in part because of climate change’s vague, uncertain, dispersed and distant effects. They shifted their focus to specific projects within the fossil fuel energy system, beginning with Keystone XL in 2011. This gave the environmental movement, with its limited resources, a point of focus, or a fulcrum if you will, which it could then leverage into a broader conversation about the perils of climate change. The response by the then-Harper government to overhaul environmental assessment processes to streamline fossil fuel infrastructure approvals and aggressively (who can forget the “radicals” letter by Joe Oliver?) fight environmentalists only emboldened this opposition as they realized they got the oil industry and its government backers to stop for a minute and scratch.

Alberta’s Climate Leadership Plan, while partly due to the unexpected win by the Alberta NDP in 2015, was the result of the realization of a significant portion of Alberta’s oil industry that a different approach was required–it needed social licence, whatever that was. The Alberta Climate Leadership Plan wouldn’t have been as significant a shift in Canadian climate politics if it did not have four CEOs of major oilsands companies (CNRL, Cenovus, Shell, Suncor) on board along with cautious optimism from Greenpeace. Such an outcome is itself nothing short of miraculous.

With the election of the Liberals in October 2015, the momentum for a shift in climate politics was building. The resulting Pan-Canadian Framework (PCF) on Climate Change builds off the work begun by Alberta and applies it nationally.

Broadly speaking, the PCF sets broad national climate policy objectives while leaving the selection of policy instruments, and the implementation of those policies, to provincial governments. The rationale behind this is that individual provinces can develop a policy mix that is better suited to their particular circumstances.

This was a smart move for federal climate policymaking, both politically and from a policy perspective. Politically, it requires provinces to develop climate policy plans tailored to their own needs and thus any critiques of the plan are targeted at the provincial level rather than fomenting fights over the inevitable inequities that might arise from nationally set climate policies. From a policy perspective, it allows the adoption of specific instruments attentive to the specific emission profiles in each province. For example, the establishment of the output-based allocations alongside the carbon tax in Alberta’s climate leadership plan reduces the overall costs of the carbon tax to industry and helps maintain their international competitiveness, while still allowing the carbon tax incentive to operate to reduce emissions. It is analogous to a revenue neutral carbon tax for individuals. Yet such an instrument is less relevant in a jurisdiction like B.C., where transportation is a more significant source of emissions.

As argued in Maclean’s by Andrew Leach, one of the architects of Alberta’s Climate Leadership Plan, the Pan-Canadian Framework depends upon Alberta’s buy-in to be successful. The province of Alberta has the largest emission profile, and the largest forecasted emissions growth in the country. Leach writes: “This is a symbiotic relationship: federal climate policy backstops put a stronger foundation under the Alberta plan and, with the Alberta plan in place, there is a credible although still very challenging path for Canada to meet its 2030 target. Without Alberta’s plan, that credible path disappears.” 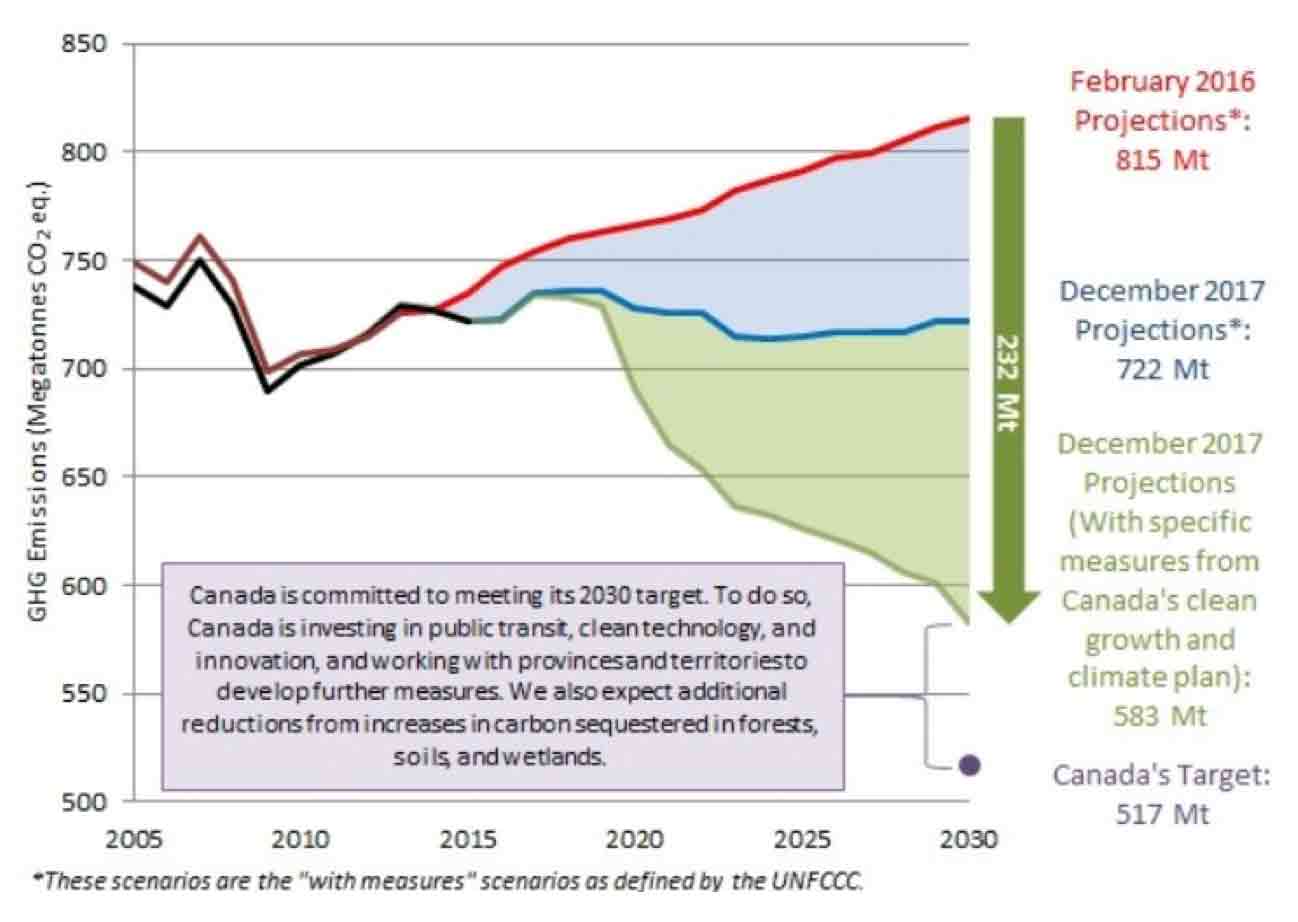 According to this logic, Canada needs Alberta to buy into the PCF in order to achieve its 2030 target under the Paris agreement. Under that target, there is still room for some oilsands growth. Building the Trans Mountain pipeline gets that buy-in from Alberta and the oil industry and is consistent with the Paris targets. But here’s the rub: the Paris target itself is woefully inadequate if we want to limit temperature increases to 1.5 degrees Celsius (Canada’s current commitment with the Paris agreement) or even 2 degrees Celsius. 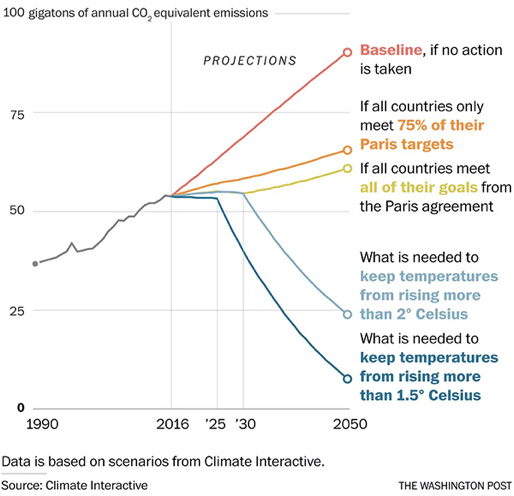 This is the environmentalist argument. Paris is not what our focus should be on, but beyond. And beyond Paris 2030 targets, there is little need for any fossil fuel infrastructure given the rapid decarbonisation that must occur to forestall runaway climate change. And that work needs to start immediately, and aggressively, to achieve its goal.

The problem is that both sides feel that they are right. What’s worse, in this particular instance, is that they are. The immediate, short-term loss in revenue is a significant hit to Alberta and the oilsands companies that will ultimately do little to affect global oil demand in the long term. And the long-term consequences of climate change and the need for aggressive, immediate action is needed.

The question for environmentalists is whether continued intransigent opposition to any and all fossil fuel infrastructure is the best strategy moving forward. I contend that the time for intransigence has passed and a more collaborative approach is warranted. The oil industry and government of Alberta has shown it is willing to work to reduce emissions. All they ask is for full value for their product. That is, I believe, a bargain worth making for a number of reasons.

First, the sustained focus on specific pipelines has already achieved its objective of reframing the debate on climate politics in Canada. The benefit of this strategy of targeting specific chokepoints within the fossil fuel energy system is to leverage those specific points towards a broader conversation and action on climate change. This strategy has largely accomplished what it can. To continue emboldens opposition on the right from Alberta, Saskatchewan, and now Ontario. It also risks turning public opinion against environmentalists for being too extreme or being labelled anti-development.

Second, while the PCF is inadequate for both our Paris targets and especially beyond, it is a necessary first step to build and entrench a comprehensive federal climate policy architecture. The biggest challenge of federal climate policy is to herd the provincial cats so that they are all oriented the same way. Only then can you start moving towards that destination. To achieve greater emission reductions is simply a matter of increasing the stringency of the various policies once in place. The hard part is getting a carbon tax in place, slowly increasing the carbon tax price over time (as will be required) is comparatively easy. The PCF largely accomplishes this orienting of the provinces such that any province that goes astray (Saskatchewan, for instance, or the threat of a Kenney government in Alberta—or a Doug Ford-led Ontario), simply becomes isolated from the rest of the country.

Climate change is a serious threat and should be treated as such. Whether the Trans Mountain pipeline gets built or not will have little impact on climate change. What is needed is coordinated, global reductions in emissions from around the globe. But first we need to coordinate ourselves. This will only be accomplished by working together and the pipeline debates detract rather than contribute to that end. Let’s stop focusing on one pipeline, we really have much bigger fish to fry.