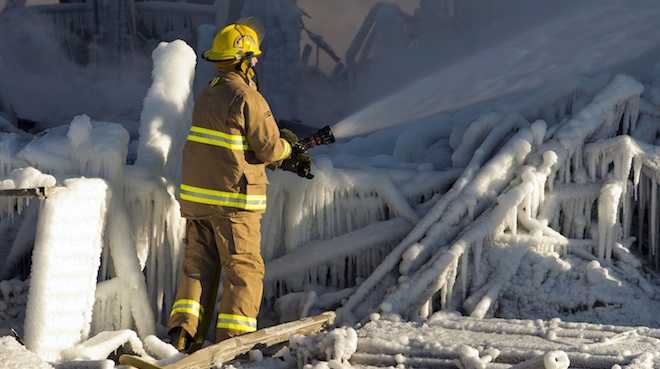 L’ISLE-VERTE — Yvon Charron and his crew of 17 volunteer firefighters arrived at the Residence du Havre old-age home in L’Isle-Verte no more than 10 minutes after the start of the fire. It was already too late. The older section of the building was burning so hot that the fire chief’s men couldn’t get close enough to do anything but control the blaze.

In all likelihood, the roughly 30 people missing were already dead. Five people have been confirmed dead.

“It was completely razed,” Charron said of the building. “It was the dead of night. People are sleeping. It’s all old-aged people. By the time someone manages to wake up…”

Charron says he and his men made it to the firewall between the new section of the home and the older section directly to its north. From behind the door, Charron said he heard sprinklers in the old part of the building—which would seem to contradict other reports that this section didn’t have sprinklers. “There were sprinklers there, yes,” Charron said. “In an explosion like that, sprinklers or no sprinklers, there is nothing we can do.”

This tiny community of L’Isle-Verte, located practically within spitting distance of the St. Lawrence River’s south shore roughly 200 km northeast of Quebec City, remains bathed in acrid smoke, the scene caked in upward of 30 cm of ice from last night’s firefighting effort. It remains bitterly cold, -18 C, which hampers the police effort to account for the missing.

Two police officers were brought to hospital for smoke inhalation during the initial rescue effort last night, according to Sûreté du Québec Lt. Guy Lapointe. Another suffered from smoke inhalation and a back injury. Because of the temperature, on-site workers are working for half-hour shifts and then resting indoors.

“We had to use water, and water freezes,” said Lapointe. “It is making the task of preserving the physical integrity of the potential victims very slow and difficult. As long as we can get lights, we will work all night.”

Lapointe said firefighters were able to rescue approximately 20 people from the 52-room facility. Most of the survivors lived in the newer section of the home, which reportedly houses palliative-care patients. Police were unable to confirm the fate of the two employees who were at the site at the time. The affected section of the building housed a public medical clinic and a pharmacy, the latter of which has temporarily relocated.

The Canadian Press says a Quebec Health Department document shows the residence had only a partial sprinkler system. Sprinklers in a newer part of the residence are thought to have set off the alarms.

The town’s mayor is currently out of the country, but will return to the village by noon tomorrow.