Now that we’re through shuffling the cabinet, we look back at the carnage. And no, I don’t mean Peter Kent’s fate or Steven Fletcher’s fantastic joke — which must be seen to be believed. I’m talking about the PM’s release of the new ministry by digital media: just a stunt, or political success?

Now, I’m biased. I was Harper’s war room chief back in 2011 and I worked for the guy. But I also work in communications now and I wanted to see if the PMO’s idea for rolling out the cabinet shuffle by live tweet worked.

My colleague Lindsay Finneran Gingras (@lindsayfg) sat down and crunched the numbers using online tools including Tweetreach, Topsy, and Twitter Counter, as well as internal tracking, and focused on the 24-hour period starting Sunday evening and ending Monday evening. Here are the most telling:

@PMHarper was mentioned in 12,774 individual tweets, with some estimates putting that at a potential reach of an estimated 2 million people, or about the same number of people who might watch a Saturday night Hockey Night in Canada broadcast. 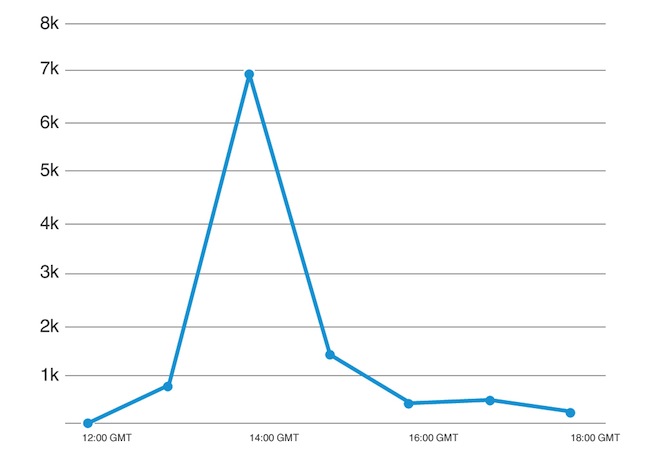 A Twitter impression is a way of saying how many potential times a search term (in this case, @PMHarper) turns up in Twitter timelines. Over the time period analyzed, the Prime Minister’s account alone created an estimated 17.6 million individual impressions on Twitter. That’s nearly 50 per cent of the population! It also represented nearly 25 per cent of the entire online conversation under the #shuffle13 hashtag, with a combined total of more than 73.9 million impressions. Even more impressive, he did this in just 51 tweets, while the entire #shuffle13 coverage generated more than 16,000.

The PM received 5,276 retweets, with his top tweet retweeted 283 times. Now, those aren’t Justin Bieber numbers, but they are way, way above what a normal politician can muster. And they’re on par with what a big-name Hollywood celebrity can get for running out to get a coffee without makeup on. 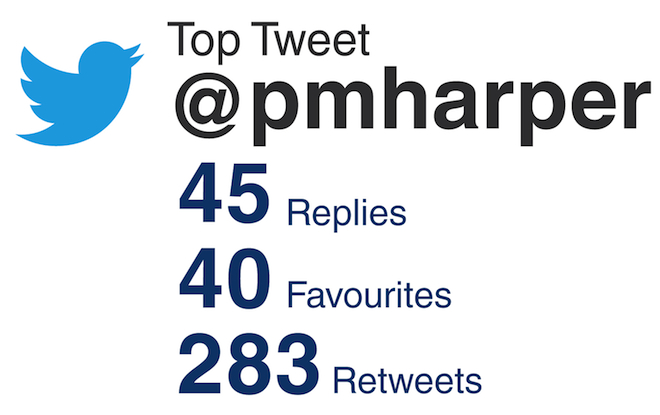 The Prime Minister’s account had the highest exposure for any tweet using the #shuffle13 hashtag at 874,000 impressions generated, followed far behind by @CP24 at 457,000 impressions. So, while media helped drive the story, the PM’s own account was the face of the shuffle news on Twitter for most Canadians. Huge for any politician.

What does all this mean? The biggest wins for the government are that their message got out and reached a younger audience, it was shared widely amongst networks that might not otherwise watch the evening news, and that Harper used the media to his advantage: calling on their resources to spread his message for him.

Long term, this also means Harper has 2,574 (and counting) new direct channels to speak to prospective voters and donors in the upcoming election – which, given Justin Trudeau’s growing social media clout, will be needed in 2015. It’s the digital equivalent of subscriptions on a mailing list: potential voters who are at least mildly interested in what the Prime Minister has to say.

That’s the key learning that athletes and politicians are now using to their advantage: they have information the media want. Instead of just handing it over and letting the media run with it, they are parceling it out in small chunks. They’re protecting their scarce resources and the only thing they can control: the news they have to break and their opinions. It’s why Dwight Howard announced his departure, recently, on Twitter rather than through team PR flacks. It’s a great tactic to keep the media interested, to take control of the message and to get it out there without a filter, especially to young people who check Instagram, Vine and Snapchat by the minute.

The one misstep on an otherwise well-executed digital roll-out was the dimly-lit video posted to the Prime Minister’s Instagram before the shuffle. Right idea, but what is it about Canadian political videos that makes them so hard to nail?

Jason Lietaer is a political strategist and communicator who wishes he was golfing. He ran the Conservative party’s war room during the 2011 campaign. Follow him on Twitter: @jasonlietaer.