The world as we see it - Macleans.ca 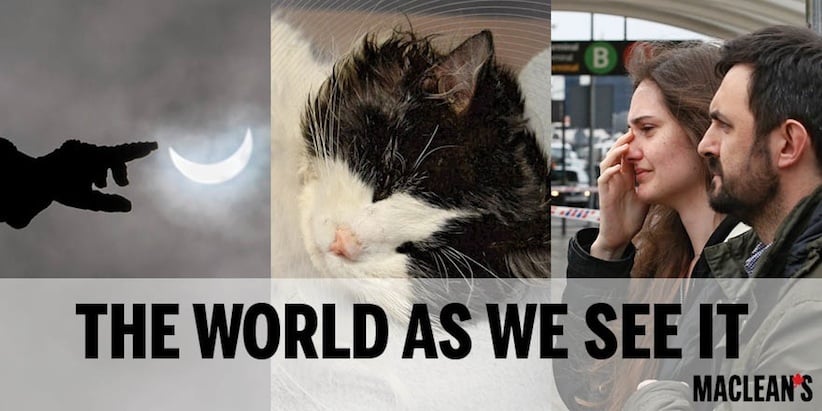 In a gesture that flew largely beneath the radar, Indian Prime Minister Narendra Modi reached out this week in a letter to his Pakistani counterpart, Nawaz Sharif, insisting that the long-standing enmity between the two countries can be resolved through bilateral dialogue. Media and politicians in both nuclear-armed countries were caught off guard: Modi, a Hindu nationalist, is viewed with suspicion in Pakistan and has held a firm line against pro-Pakistani separatists in the disputed region of Kashmir. If Sharif reciprocates, this could be a Nixon-to-China moment.

Driver reports himself for drinking and driving

Seldom do the misery of alcoholism, the danger of drunk driving and the poignancy of a man confronting his demons converge like this. Last week, a 55-year-old man in southwestern Ontario pulled his car over and called 911 to report himself for drinking and driving. “I finally just decided I had to hit the bottom of the barrel and go get some help,” Donald Dummer later explained. His moment of clarity comes on the heels of a study finding seven per cent of all deaths in Canada are related to alcohol; the authors want family physicians to make questions about drinking a regular part of any exam. Docs can only hope for patients as honest as Dummer.

The future is now: Amazon to test package-delivery drones

Amazon has been given the go-ahead by U.S. aviation authorities to test package-delivery drones—although the requirement they be flown by licensed pilots puts a crimp in dreams of airmail book drops. The self-driving car, meanwhile, appears imminent. Tesla Motors has unveiled software that will autopilot its Model S electric cars along major highways. We’re still a bit short of hoverboards and flying cars, but you can at least enjoy a coffee while you wait—Starbucks is poised to roll out home and office delivery.

Tank nation: Whither the Leafs?

It’s been apparent for a while that the Toronto Maple Leafs have given up on the season. Now, finally, so have their fans. TV ratings have dropped so precipitously that the team was bumped from the marquee Hockey Night in Canada telecast last weekend—for the first time since 1972. And attendance at a Monday-night home game against Minnesota was the lowest in the 16-year history of the Air Canada Centre. Maybe fan indifference will succeed where all that booing and tossed sweaters have failed, and spur management to build a competent hockey club.

The notion of stability in the Middle East and North Africa is fast disappearing under a blanket of rubble. In the Yemeni capital, Sana’a, 152 people died when four suicide bombers set off explosive belts around two mosques used mainly by Shia Muslims. It’s not yet clear who was responsible, but Islamic State supporters hailed the attacks on Twitter. The blasts came just days after 23 people were killed and dozens wounded in a museum bombing in Tunisia, the birthplace of the Arab Spring in 2010. Authorities have arrested 10 militants, saying the suspects trained in jihadist camps in Libya, where Islamic State has been gaining strength.

The obsessive secrecy of Stephen Harper’s Conservative government is starting to smack of contempt for taxpayers. The ruling Tories admit they ran roughshod over federal contracting guidelines in commissioning a six-page, $5,650 speech from Guy Giorno—a former chief of staff to the Prime Minister—to be delivered in 2013 by Joe Oliver, who was then the natural resources minister. The speech was so urgently needed that there was no time to follow the rules, they say. Yet the government refuses to reveal the group that Oliver, currently the finance minister, was scheduled to address, and it turns out he never delivered the speech at all. How about a refund, Mr. Giorno?

Greece lightening: In want of time — and cash

A month after its latest national bailout deal, the Greek government still hasn’t come up with a list of promised budget savings. So Prime Minister Alexis Tsipras went to Berlin to beg for more time, and cash. The fiscal breakdown, he says, will arrive next week. Just as soon as the nation finishes checking for loose change under the sofa cushions.

A thick blanket of smog caused authorities in Paris to ban most vehicles from city boulevards last week, and reduce the speed limit to a poky 20 km/h. More than 750 police officers were positioned at key intersections to write tickets for motorists who tried to skirt the measures. Air quality in the French capital has been worsening for weeks, with landmarks like the Effiel Tower obscured by the haze. But the response only came after Paris achieved the dubious distinction of becoming the world’s most polluted city on March 18, surpassing, for several hours, the filthy standard of Shanghai, China. La vie en—cough, cough—gris.

Pope Francis: ‘Well, would you look at that’

Sure, the Pontiff is kind of cuddly, but no one expected a group of cloistered nuns to mob him during a recent speech in Naples, Italy, where he was talking about how religious leaders should exude joy and enthusiasm. According to reports, the nuns surrounded the Pope and tried to shower him with gifts while a cardinal admonished them over the PA system, saying, “Sisters… Later… Well, would you look at that. And these are the cloistered ones. Just imagine the non-cloistered ones. They are going to eat him! Sisters… Sisters!”

The singer announced that after a year’s hiatus—during which she helped her husband and ex-manager, René Angélil, recover from cancer—she’ll be returning to her gig at Caesars Palace in Las Vegas, where her contract extends to 2019. Dion is credited with spawning the current wave of pop star residencies in Vegas; she’s been there since 2003, which is when a 21-year-old Britney Spears first saw her show. Spears is now in the middle of her own Vegas run, ending in 2017; Mariah Carey’s stint starts soon, and Jennifer Lopez is expected to announce her own show. Meanwhile, the Montreal Gazette reported Dion’s new managers were not renewing the contracts of four of her long-time musicians, including bandleader Claude “Mégo” Lemay, who held that position for 28 years. Lemay wrote on his Facebook page, in French: “It’s with great emotion that I receive the slap of my firing.”

The 27-year-old star of Gossip Girl has gone through life with a masculine name, and now so will her daughter: James. Lively, married to the Vancouver-born  actor, gave birth in December, but Reynolds only confirmed the name this week. Reasons were unclear, although gender-neutral names are increasingly popular. Or maybe they’re both big fans of James Taylor’s 1970 lullaby Sweet Baby James.

Ted Cruz enters the race for the White House

The first-time Texas senator became the first Republican to declare his candidacy for president in 2016. The man who tried to block Barack Obama’s health care plan by, in part, reading Green Eggs and Ham on the Senate floor as part of a filibuster, vows to repeal it if elected. He also intends to eliminate the Internal Revenue Service and redirect the resources to border control. Cruz is clearly not aiming for the political centre: he has denied climate change, espouses anti-abortion principles and opposes same-sex marriage. There is, however, the messy matter of a birth certificate: he was born in Calgary, but renounced his Canadian citizenship last June.

The B.C. native won two NBA MVP awards with brilliant, precise passes. While he just announced his retirement from the NBA after 19 years, Nash is hardly done doling out assists—as the GM of Canada’s national basketball team, he’s got his gaze fixed on the 2016 Olympics.