Federal Conservative leader Andrew Scheer and his wife Jill walk on the beach after making a campaign stop in Canoe Cove, P.E.I. on Sept. 22, 2019 (THE CANADIAN PRESS/Nathan Denette)

It certainly was an eventful week on the campaign trail—perhaps for all the wrong reasons. As Trudeau and the Liberals were increasingly projected as favourites earlier last week and seemingly gaining in momentum in the numbers, pictures from Justin Trudeau’s past sent tremors through the Canadian political world.

Whether they will they have a lasting effect is still an open question. Here is a short recap of the past week in polling. Let’s begin with pre-blackface polls (follow links to poll details):

And here are the polls whose field date were after Trudeau’s pictures came out:

All publicly available federal polls are listed on this page. Here is the 338Canada federal update for September 22, 2019.

The 338Canada poll average gives the slightest of edge to the Conservatives on the popular vote, one point over the Liberals: 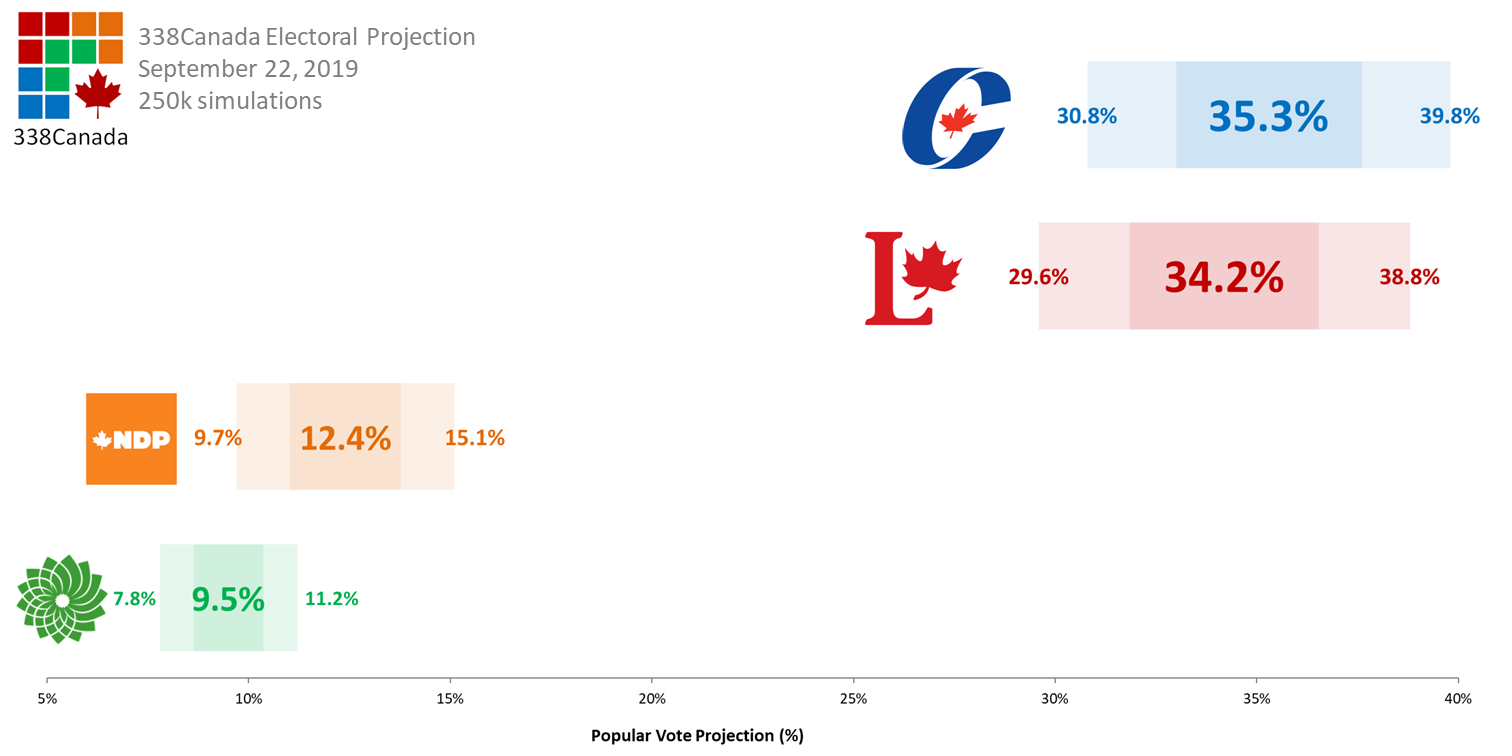 However, we notice from the graph above that confidence intervals for the CPC and LPC overlap significantly. These wide margins are not a bug of the model, but a feature: as Ipsos Canada president Darrell Bricker mentioned this week on his Twitter feed, poll aggregation does not reduce the amount of uncertainty in the calculations. Rather, the model calculates an average and considers the margin of error/uncertainty of all major polls to encompass numerous possible scenarios.

That’s why understanding uncertainty is so vital for such analyses.

Here is the federal seat projection according to the numbers above: 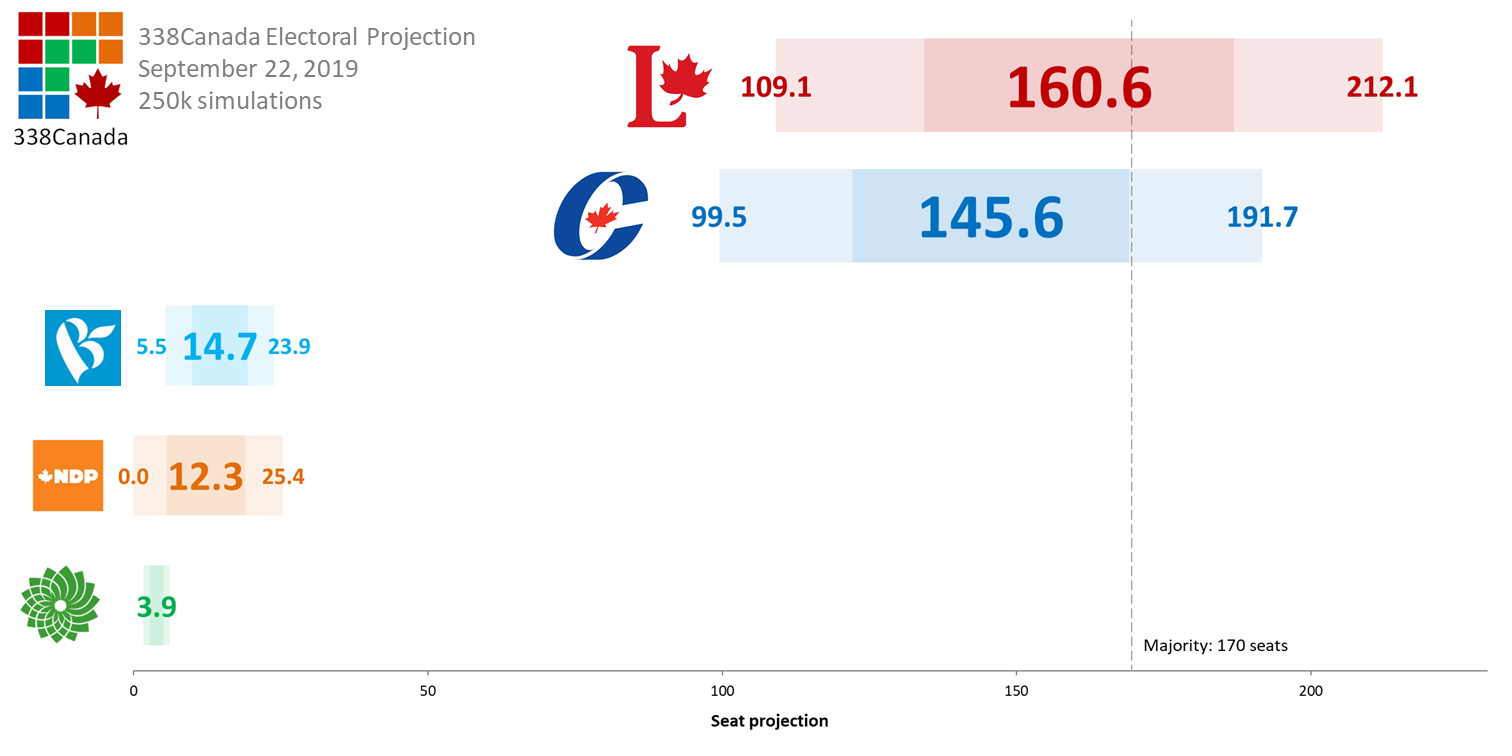 Although the Conservatives hold a slim lead on average in the polls, the regional breakdowns still modestly favour the Liberals. According to these calculations, the Liberals win an average of 161 seats, and the Conservatives 146. Again, this incredibly narrow 15-seat margin between the main parties is much smaller than the model’s uncertainty.

For instance, the latest numbers out of Quebec show the Bloc québécois has gained a few points since the campaign officially began. At around 20 per cent in Quebec, the Bloc would still be a minor player in the province—but should that support climb up to between 23 per cent and 25 per cent (or higher), several districts, especially in the suburbs of Montreal, could potentially turn to the Bloc due to the splintering of the vote.

Should the Liberals lose their dominance in Quebec, it would be nearly impossible for the Liberals to remain in power.

The same goes for the Toronto and GTA-905 regions. In 2015, Trudeau’s Liberals won 49 of 55 electoral districts in the region, but several suburban districts were won by slim margins. Only a few points could flip this projection upside down.

As for odds of winning the most seats, over the course of the model’s 250,000 general election simulations, the Liberals won at least of plurality of seats in six of 10 simulations. 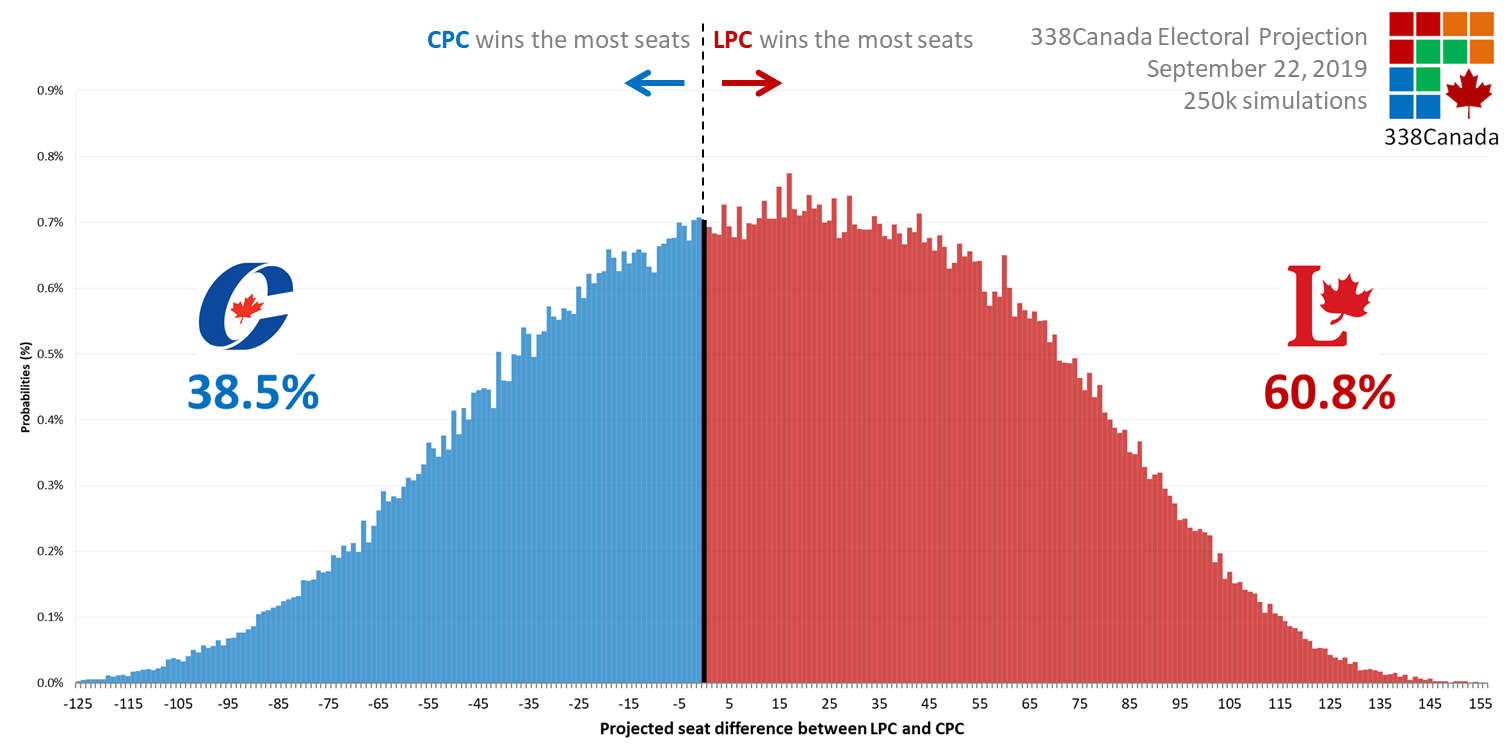 That’s how close the race is between the two parties. For anybody who claims to know the outcome of this election, ask them how much they are willing to wager on 50/50 odds and watch them suddenly act a little more cautious.

Back in 2015, it was not before early October—less than three weeks before election day—that Trudeau really started to distance himself from the pack, and it was only in the last week that it appeared like he really was going to win (although there was disagreement by what margin he was ahead).

So we keep analyzing the numbers coldly and rationally. We beware of daily noise and overreactions from partisans.