'Unexplained losses' of opioids on the rise in Canadian hospitals - Macleans.ca

Opioids are going missing from hospitals at an alarming rate, and as the opioid crisis deepens, the number of drugs that disappears is increasing.

“We know that unfortunately, with high addiction levels, [opioids] are frankly being diverted to the streets,” Michael Harris, PC MPP from Kitchener-Conestoga, said. “They are being diverted from our public health institutions that frankly need them to deliver health care.”

Health Canada data obtained by CityNews through an Access to Information request reveal between 2010 and September 2017, opioids went missing from Canadian hospitals 5,689 times and the quantities varied from a few tablets to packs of 100 pills.

The highly addictive and potent fentanyl is disappearing from Canadian hospitals at surprising rates, but the number of other opioids that vanish from hospitals is staggering.

Morphine, hydromorphone, oxycodone, codeine, and fentanyl all seem to disappear without a known cause from Canadian hospitals—and nowhere more so than in Ontario. 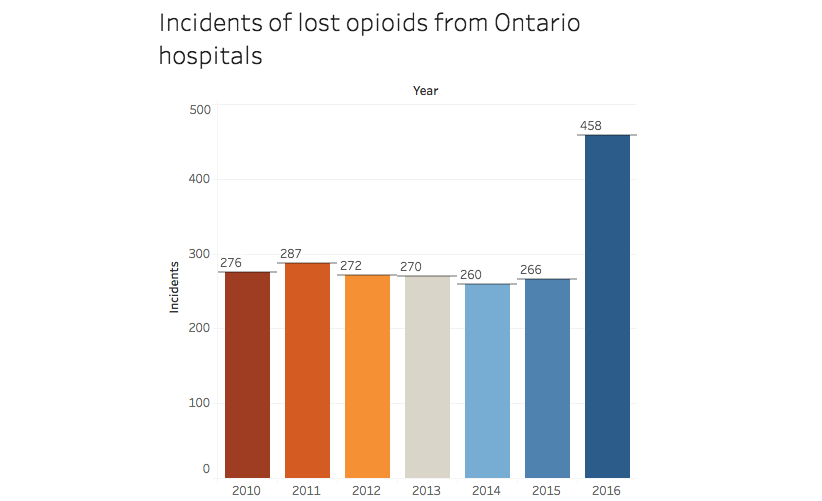 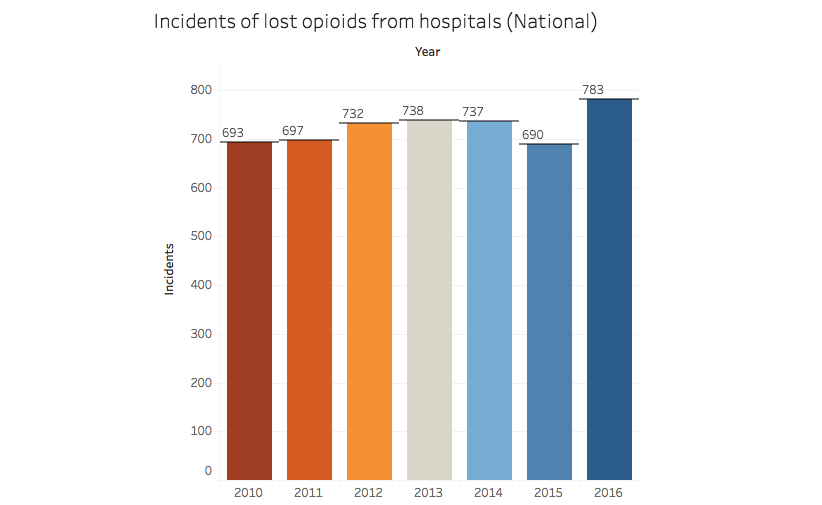 Is the health care system in crisis?

“None of this ever gets to be a priority. None of this gets to be acted on because we have a minister of health who stands alone in saying that we don’t have public health emergency when it comes to opioids in Ontario.”

According to Public Health Ontario, 865 Ontarians died of opioid overdoses last year—nearly double the number from a decade earlier.

“Two people die a day from an opioid overdose,” Harris said. “We tend to be more reactive than proactive.”

Health Minister Eric Hoskins said he didn’t know about the increase in missing drugs from hospitals.

“I’m not aware of that,” he said. “We are taking every necessary measure to ensure at every touch-point appropriate prescribing at the level of the pharmacy, education to recipients of legal opioids, quick response and support for detoxification … We have a comprehensive program across that. We expect our hospitals to do everything within their ability to ensure the security of their supplies.”

The data suggests narcotics are not secure.

“Pharmacies and pharmacy professionals are responsible for the safe and proper management—including storage, dispensing, documentation and inventory reconciliation—of all drugs under their control,” wrote Todd Leach, spokesman for the Ontario College of Pharmacists.

“Health Canada’s Narcotic Control Regulations (NCR) places the responsibility on the pharmacist and pharmacy owner or manager to take all reasonable steps to protect the narcotics under their control.”

And while pharmacies must report all losses to Health Canada within 10 days, they don’t need to report how it was lost. Although break-and-enter, grab thefts, and employee pilferage are significant sources of loss, 77 per cent list the cause of loss as “unexplained.”  There doesn’t appear to be any consequence for health care professionals or hospitals for failing to determine the source of loss. 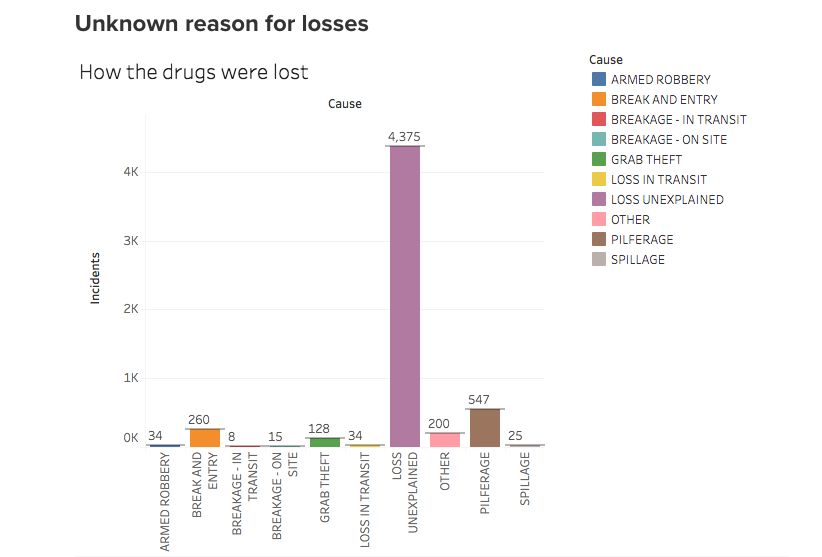 “Failure to maintain any of the standards of accreditation is considered to be an act of proprietary misconduct which can trigger a disciplinary action at the Ontario College of Pharmacists and lead to the revocation of a pharmacy licence,” wrote Hoskins’ spokeswoman Laura Gallant.

But that hasn’t happened, at least not for hospital pharmacies.

Publicly available data through the College’s disciplinary database doesn’t list any hospital pharmacies that have lost their licence or had conditions imposed on them because of lost or stolen narcotics. Only one pharmacy, a small Mississauga retail operation, appears to have been forced to close because of inappropriate and unauthorized purchasing and dispensing of narcotics.

College spokesman Todd Leach said in 2016 and so far in 2017, four hospital pharmacy professionals (all of them pharmacy technicians) have been reported to the College for narcotic diversion-related conduct.

“All four of these cases are Registrar Investigations, meaning that the College received information through means other than a complaint, such as through an employer notification or police report, and subsequently initiated an investigation,” he told CityNews in an email.

“They are active investigations, which means that there has been no disciplinary actions taken or decisions made. There have been no completed discipline decisions involving hospital pharmacy professionals related to narcotic management during this same time period.” 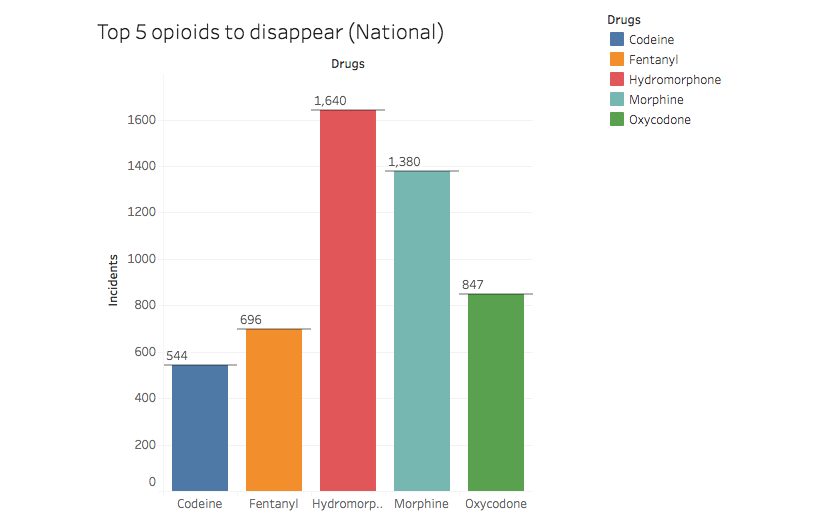 But pharmacists aren’t the only hospital staff with easy access to narcotics. Physicians, nurses and personal support workers often have access to the dangerous drugs.

The Canadian Society of Hospital Pharmacists (CSHP) has been lobbying for better safeguards to prevent hospital narcotics from getting into the wrong hands.

“We continue to advocate for additional safeguards to control and monitor opioid inventory within the pharmacy, in patient care areas, and in operating rooms in hospital settings,” wrote Ryan Itterman, president of CSHP’s Ontario branch.

Toronto General Hospital is one of several that have automated dispensing units in place. It processes and dispenses prescriptions in a tightly controlled manner.

“The access really here is with a fingerprint,” explained Jin Huh, senior director of pharmacy at Toronto General Hospital. “This is unique to the individual and it tracks the actual use in regards to every medication they take out.”

The machine scans the prescription, packs the order and allows the user access to just that one drug. It then asks how many other vials the user can see in the drawer, although the machine tracks that itself.

“It’s another way of having practised surveillance of actual counts that are happening every time this drawer is accessed,” Huh explained.

He said the data gathered by the system also helps the hospital to track abnormalities.

“When we notice irregularities, we will do a further investigation to understand why we are seeing changes in practice in actual utilization,” he said.

It’s the kind of tool Gelinas has seen at work in new hospitals and wants expanded to others.

“We know that it improves medication management everywhere it went,” she said.

Despite the increase in lost opioids from Ontario’s hospitals and the growing opiate crisis on the streets, Hoskins wouldn’t commit to funding additional security measures like automated dispensing machines at older hospitals.

“I’m confident that in the vast majority of our hospitals, there are highly secure environments for controlled drugs and substances,” he said.